You are here: Home » Music » Playlist: Music For The Dark Times

Playlist: Music For The Dark Times

It’s not that things have been that dark lately, I swear. As a matter of fact, I’ve been I particularly cheery mood. But in the auditory part of my brain, something was obviously leaking. Dark music doesn’t necessarily mean I’M dark. I’m not listening to music to continue feeling the same. Maybe listening to the other side of things is a good way to prepare for the future. I may be happy now, but later, who knows? It’s kind of like the opposite of a solar panel.

“Fragment Two”  is one of several stunning tracks from Field Of Reeds, the recent album by These New Puritans. The song features a haunting brass section whose harmonies seep from the cracks in the ground. It summons an odd sense of comfort, like falling but knowing you’ll never reach the ground.

Occasionally, I hear a classic band for the first time and I’m ashamed it took me this long to discover them.  You can hear so many contemporary bands when you listen to “I Wait Around” and like The Velvet Underground  or Gang Of Four before them The Clean created a form of rock that reflected the experience of living, rather than the reality of a soul-less testosterone overload.

I revisited Janelle Monae’s excellent album to bone up for her new one. From track to track, you never know what you’re going to hear from this artist. She flips from spaced out ambiance to raw soul. “Tightrope” featuring Big Boi is an example of the latter and a real joy all the way around.

It’s possible to include Fugazi without seeming like I’m promoting indie cred, right? “The Kill” has always mesmerized me. I think the These New Puritans got me in the mood. Nothing is better than whistling through the darkness like winter wind.

I want to hate Pharrell every time I see him on television or listen N.E.R.D. But Clipse’s “Hell Hath No Fury” alone, a Neptunes production, has ensured that I can never hate him that much. “Keys Open Doors,” is one of those tracks that is basically in my head all the time, there for me whenever I need to dig in, narrow my eyes, numb my senses and get after it.

Mac Demarco looks the way his music sounds. I never should have looked at a picture of him because now he’s all I can see while I’m grooving out to a weirdly dark shuffle like “Move Like Mike.” If These New Puritans take you out into a dark field to murder you, Mac Demarco is the lovable clown who comes out of nowhere to make them feel so uncomfortable they let you go.

“Surf’s Up,” comprises the best of the doomed “Smile Sessions,” which was meant to be the follow up the legendary “Pet Sounds.” In the eponymous track, we hear the melodic, chorusless influence of Brian Wilson collaborator Van Dyke Parks. This masterpiece is arranged by mood and and its parts interlock without having a beginning or end.

EMA’s face is often disguised by hair which hangs low on her forehead like sitting room shades. The songs, like “California” are at once, angry protests, pleas, laments. She dances with weapons, pain and sadness. 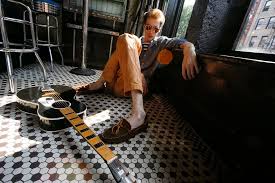 One must make the most of lengthy reasons for despair. In “Terra Incognita” we travel to an opioid paradise, purple light piercing openings in the dark sky. Later, we party in the palace of twisted staircases and uneven vestibules.

The thing that “Strayed” in this wacky number was the gnome that scrambled across the organ keyboard. In the confession booth is a guy on electric guitar, who is trying his damnest to cleanse himself of all his sins. What is confession after all, but justice aversion?